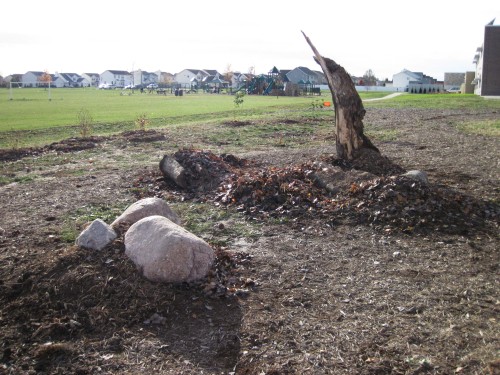 I so miss my time on the prairie.  I was there ten days ago and already want to return.  Speaking at the Champaign County Audubon Society’s monthly meeting brought me out to Champaign, Illinois.  Creating a Habitat Garden at Carrie Busey Elementary School in Savoy, Illinois will bring me back.  “How tall is the oak tree?, Have the insectary shrubs filled out?, Are birds using the dead wood spire as a perch?” and so many more questions that will gnaw at me over the years.  I miss my children (the trees, shrubs, wildflowers, and animal habitats) in Savoy.

Here is my Native Plants and Wildlife Gardens post.  If nothing else, I hope you get what a pleasure meeting and working with those Illinoisans involved was.

And if you like the buffeting sound of a windy day, then here are two videos of my Habitat Garden installation at Carrie Busey Elementary School in Savoy, Illinois:

The Before — Habitat Garden

The After — Habitat Garden

Any school out there looking for a Habitat Garden?  Give me a buzz — I’ll give you a flower.   Enjoy your precious time on our glorious Planet Earth.  And when in doubt, Habitat It!

Now that Halloween is over (in a couple of hours), I want to run through what to do with the seeds from pumpkin carving.  The next few days will be a new video each day depicting the fine art of collecting/processing/storing pumpkin seeds.  Enjoy!

Oh, about seeds, so glad I can legally harvest from the pumpkin that we have — that might not be the case some day if we lose food freedoms from mega agriculture corporations.  Keep food (and seeds) available to the people — vote Prop 37 (California)!!!

THEN a video  re “Saving Happy Halloween Pumpkin Carving Seeds”.   6 videos (1/day) for the series!

Male pumpkin flowers have a long thin stalk as long as a foot from the vine. These flowers are pollen suppliers -- they will not die back and leave a fruit underneath the shriveled petals, as do the female flowers. 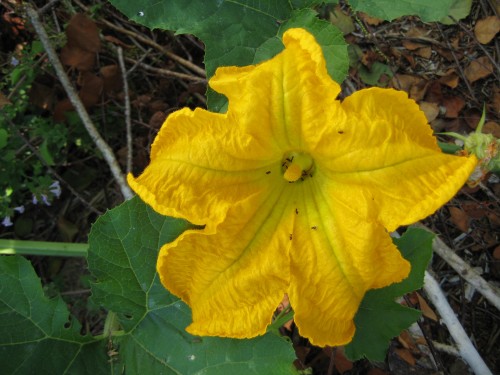 A female pumpkin flower being pollinated by a small swarm of midges.

Female pumpkin flower with typical bulbous base, close to the vine. Too early to tell whether pollination was successful -- the fresh petals tell me that this flower bloomed the night before or early this morning. The petals will die back by the next day. If she is not pollinated, the small base will shrivel up and fall off the vine. If she is pollinated, the flower petals will still die back, but the bulbous base will grow bigger -- a pumpkin is born!

European Honey Bees gather pollen in a squash flower. Note 1) the dusting of pollen on the bees' entire body; 2) the chamber-like ovule of this female flower; and, 3) the nectariferous area, or the inside bowl , that collects falling nectar -- sticky and hairy!

An interesting blog explaining pumpkin flower pollination, including hand-pollination (being your own pollinator):  Pumpkin Nook

2. Pruned the gravenstein apple tree in our front yard.

You, the Habitat Gardener (reflections):

1. A light, misty rain this afternoon.  Time for me to get another crop in the ground.  Last season’s green mulch supplies are still on hand; might as well use the seeds up while they are still viable.  Found paper bags with fava bean and both red and white clover seed in our cold storage (sealed plastic bin in unheated shop).  Perfect!  The fava bean will both enhance the soil and provide veggies in the spring.  The red and white clover will also nitrogen fix the veggie bed’s soil AND the insects will love the flowers.  Bees and other polinator insects will be buzzin’ in the front garden — our little pollinator helpers to ensure all those fava bean flowers develop into pods.

The front veggie bed was just recently half planted with garlic cloves.  It was then covered with a light mulch of old straw.  Even though that straw mulching was mostly to protect the garlic starts and the new soil that was used to plant the garlic, the entire bed was mulched with straw — even the unplanted half of the bed was mulched.  I figured that the straw layer over the unplanted half would bulk up the organic matter in the bed and be ready and waiting for a new crop.  Well, now that new crop is here.  I mixed all three seed types (fava, red and white clover) in a large bowl and sprinked them out onto the bed’s unplanted half, the half alongside the sidewalk.

A thin layer of soil over the beans and seeds will suffice as “planting” them.  Luckily, the rich soil from our harvested potato crop is avalable to throw over the planted bed.

I’ll feel lucky when the garlic on the other half of the bed comes up.  We used straw to mulch over the planted cloves and soil layer.  The expected hard rains demanded that the soil be covered, that is, not exposed and vulnerable to harsh rainfall.  The downside of that mulch is its insulating nature — the weak winter sun will have to warm both the straw mulch and the garlic to germinate it.  So, for this half of the bed, the fava bean crop, we are not mulching over the soil. 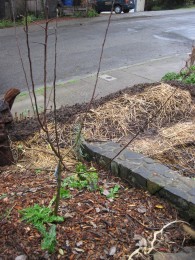 2. Pruning time for our dwarf Gravenstein apple tree.  We want to encourage the tree to provide fruit low to the ground — no sense in having to pull out a ladder just to pick an apple.  So hard to prune this already small tree but our patience will be rewarded some day with a full-figured, strong-limbed, laden apple tree. 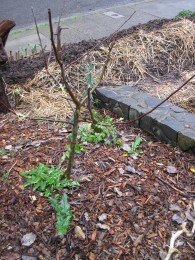 The prunings were chopped into small bits and placed around the trunk; every plant is entitled to its decaying minerals.  Just a hunch, but I bet that the tree, and perhaps its co-existing fungi, will appreciate dead wood of a similar species, if not from exactly the same plant.

Chop and drop at base of apple tree. Note the limb prunings left as small apple tree "wood chip" mulch.

Lastly, the base of the tree was chopped and dropped.  In other words, the resident dandelion (has been living for many months) and a new arrowhead plant was chopped at their base, BUT NOT PULLED.  Doing so, the plants’ roots will die back and leave loose organic matter in the soil.  Yummy!, says the tree’s roots.  The greens left on the wood chip surface will mulch the surface, with the organic matter in the leaves feeding the top layer of soil.  Then the “weeds” will grow back, Tony will chop them again, over and over and apples and apples again. 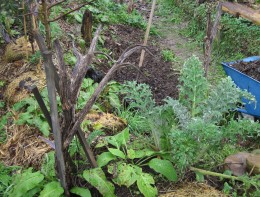 3. I once heard that artichoke plants ought to be cut to the ground in winter in preparation for the spring’s new growth.  Well, another “ought to” that I am not getting to.  I have enjoyed witnessing the full cycle of these enormous thistle-like plants.  Up. up, and up grow the stalks, bulking thicker and thicker as they grow.  Heavy duty veggies!   Then, the joy of the flower bud, which is the “artichoke” itself.  And sometimes I don’t want to harvest that bud.  I egg on the magnificent flower that follows.  Come butterflies, bees, wasps, beetles, and all pollen lovers to Artichoke’s purple carpet in the sky.  But, alas, the end is then near. The flower dies back, bleaches silver in the sun, and becomes a highrise insect commune.  But beware — spiders are the landlords and the rent they charge will suck the life out of you!  Soon the entire shrub-like plant, both stalk and spent flower, takes on a sun-scortched, wind-twisted tangle of gracefulness.  Art in the garden.  And all I did was plant an artichoke plant.  And, the best is yet to come.  This decaying artichoke stalk is both GARDEN SCULPTURE and HABITAT.

A couple of weeks ago, I noticed that the plastic nursery tag for the Green Globe heirloom artichoke planted on Dragon Spine Ridge had fallen away from the plant’s base.  Not wanting to throw away the tag because the perrenial artichoke lives on, I thought to stick it into the plant’s spent stalk.  Amazing how nicely the pointed tag cut into the vertical fibers of the old stalk.  Wow!, that’s habitat material. 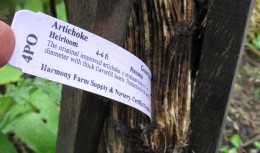 If the thin plastic nursery tag could penetrate the artichoke’s stalk so easily, you can bet for sure that some insects have bored holes into this plant.  Sure, some of those insects will thrive inside the plant stalk to emerge, as larva or adult insects, and eat next summer’s artichokes.  But, we have plenty to share.

If we focus on growing biodiversity, and not just this plant and that plant, we will have strong gardens.

Stay warm in your over-wintering habitat.