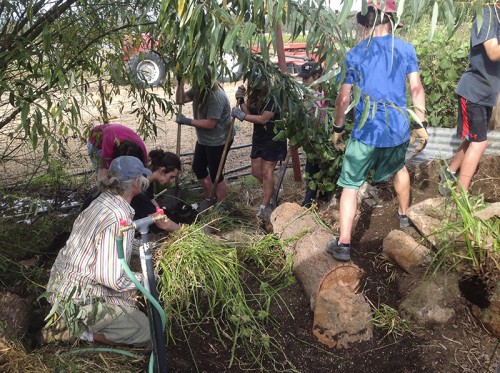 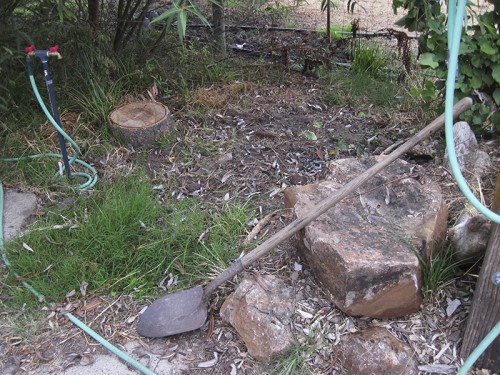 Salamander French Drain — The BEFORE.

Today’s installation, Salamander French Drain, is about protecting the Habitat Garden’s water feed pipe with a gravel filled swale.  Water collected in the swale will soak a pile of rocks under the nutsedge bed the students plant.   AND, there’s a wood creature involved. 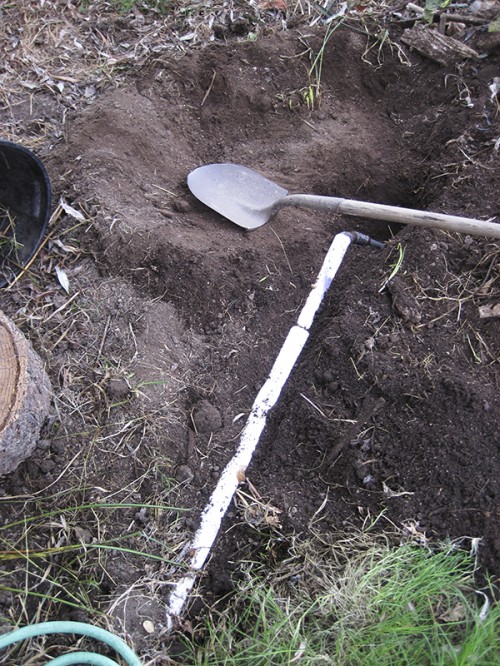 The 3/4″ schedule 80 PVC water pipe that is T’d off at the hose riser (hose faucet pipe) continues underground.  Telescoping sch 40 PVC (3″ and 2″) pipes encase the water pipe to protect it from unwary shovels.  The water/pipe has come from the back of the Nursery in a straight line but a previously installed habitat, Big Splash Hotel and Spa, blocks access where we want the pipe to rise out of the ground.  So, the pipe was diverted at the hose faucet pipe; from there the pipe angles into the Habitat Garden.  A 90-degree elbow (under shovel in above pic) sends the pipe back to the pipe’s original direction, BUT around Big Splash Hotel and Spa.  Big Splash gets water AND maybe the buried water pipe will survive.  One way to help protect the buried pipe is to mark it. 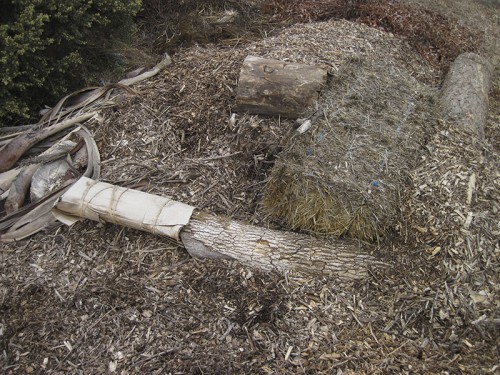 A wood stump is called into action — it will be a marker post.  It will mark the 90-degree turn in the buried water pipe.  The stump was buried in a woodchip pile for a few months to keep it alive, so the critters and fungus in it could thrive.  The stump goes into action as a wildlife habitat installation resource ALIVE.  The stump itself is habitat, full of microbes, fungi, insects, and crawly critters that are food for larger organisms. 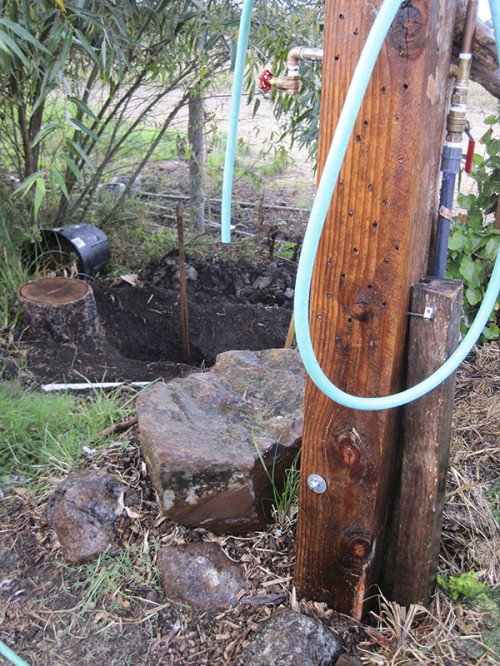 Big Splash Hotel and Spa’s hose water comes from the left, behind the landscaping boulder, and up Compost Cricket Corral‘s corner post. 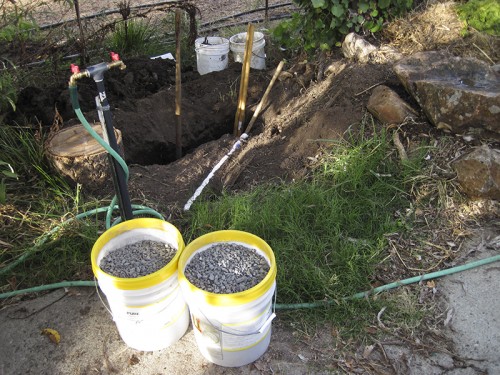 A gravel layer under landscape cloth and sedge plants will “French drain” the water into a rock-filled hole.  Note the grasses behind and to the right of the gravel buckets; that invasive alien Bermuda grass will be replaced with native umbrella sedge, Cyperus eragrostis, or, nutsedge. 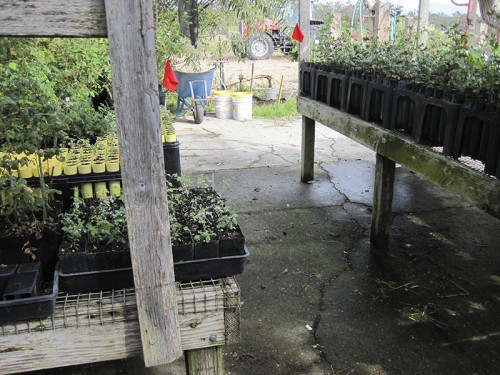 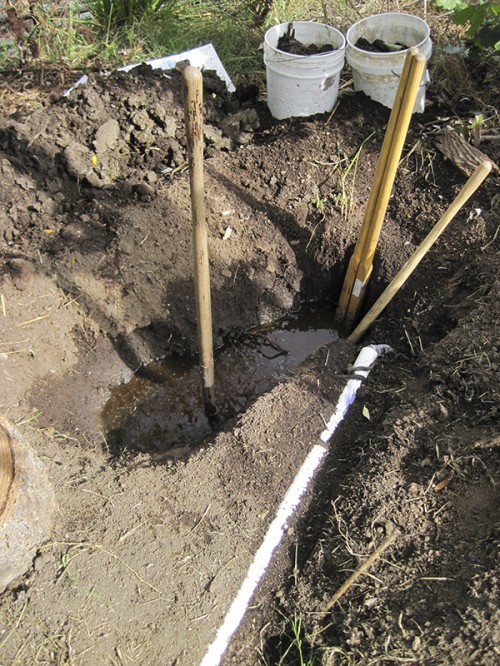 The hole to be filled with rocks gets deeper.  Water was used to soften the hard, dry adobe soil.  The marker stump will be positioned far right.  A second stump will sit in the hole’s middle, with large fieldstone rocks filling in the rest of the hole.  As done in Big Splash Hotel and Spa, moisture holding fieldstone will be used to create an underground moisture sink, a watering hole when all else is dry, prime real estate for moisture-loving critters, habitat! 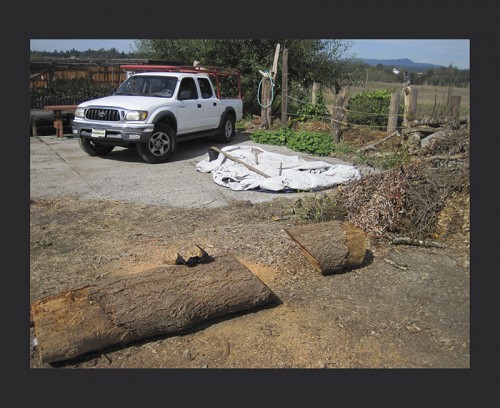 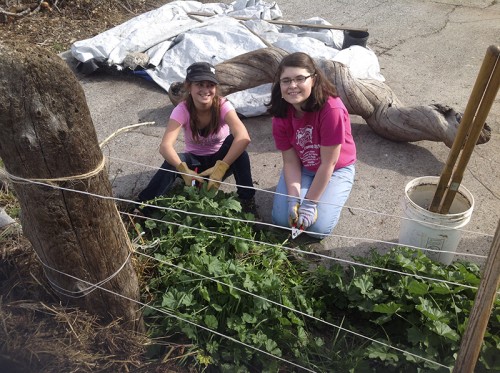 Weeds in front of the compost are not pulled out, but are cut at soil level — “chop and drop” in Permaculture parlance.  The new greens will be added to the compost to feed it, nurture it. 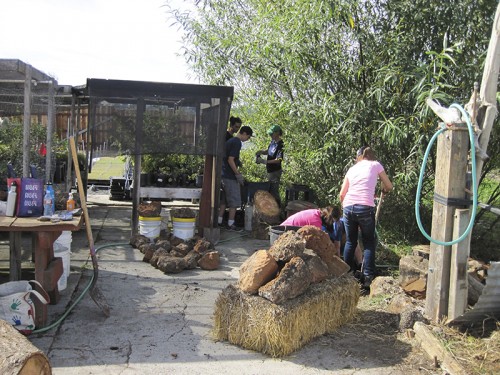 In prep for the nutsedge plants and seeds to be planted, one team (background) harvest discarded potting soil and another team (foreground) removes Bermuda grass thatch. 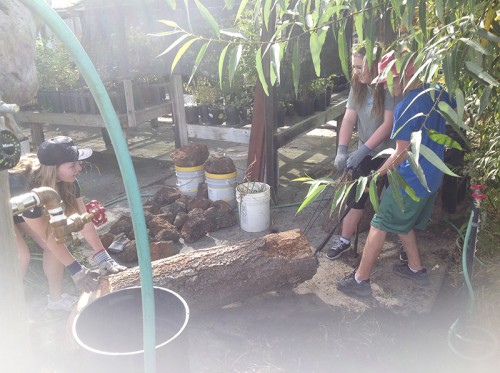 And here comes the retaining wall log that will hold the slope of soil from the compost and leave leg room in front of the bench. Two students pull the log using straps, one steers from behind. 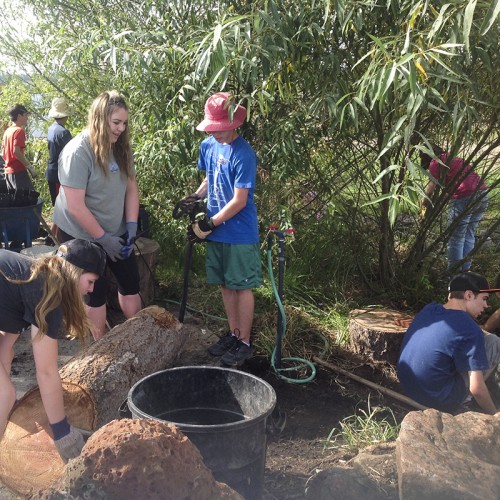 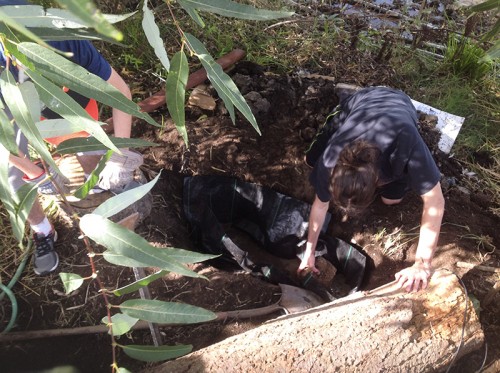 Fieldstone rocks are placed in the landscape cloth-lined hole before tree stumps are added.  Note the black landscape cloth in the hole; it will keep soil from filling into the cavities and crevices between the fieldstone rock pile in the trench.  The maze of different-sized vaulted-ceiling chambers will become shelter for many different-sized critters.  Also, less soil in horizontally oriented pockets or holes in the rock means more water can fill in those holes.  Every subterranean fieldstone rock in the habitat installation, therefore, will become a Thousand Lakes tiny critter housing development — habitat for microbes, insects, snakes, ground spiders, gastropods, lizards, worms, and many other fauna. 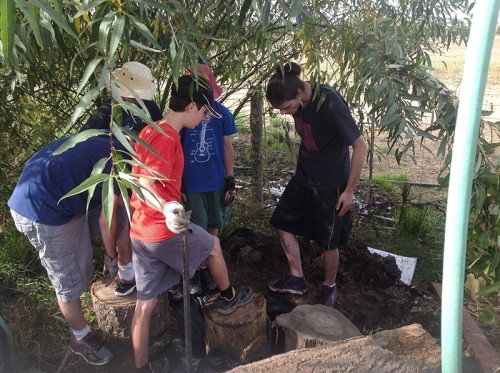 The students used a 2-by-4 (2″ X 4″ wood beam) to fix the height of the stumps.  Then, each stump was leveled using a basin of water.  Simple, effective tools and know-how to dial in exact placement of the stumps that will be the sturdy base to a heavy redwood bench. 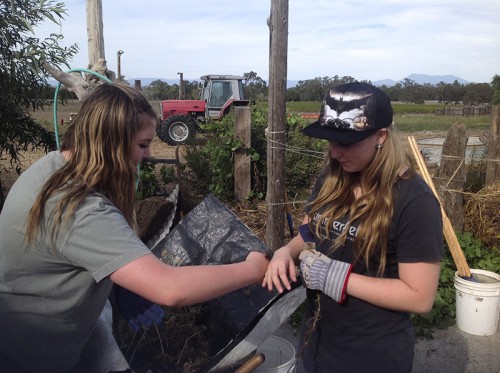 Yarrow plants, collected from the garden resource bin (AKA “yard debris bin”) are stripped of their seed heads.  The seeds are then spread alongside the Nursery’s concrete slab to discourage water erosion. 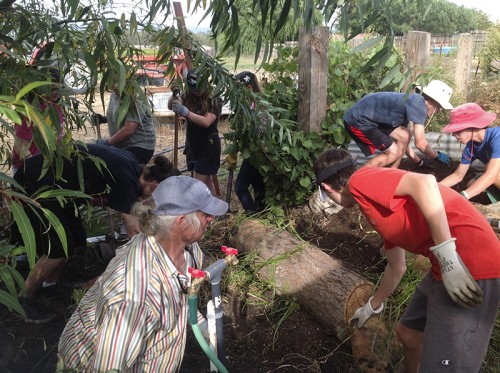 A large rock is placed against the retaining wall’s slanted cut to help hold the log in place and to hide the saw cut. 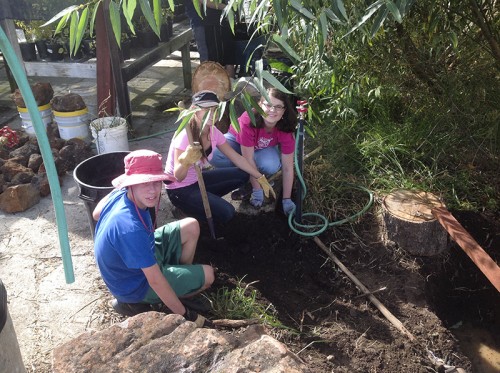 Move over weeds, here comes native umbrella sedge (Cyperus eragrostis), or “nutsedge”.   Note the 2X4 on the right used to position the proposed bench’s foundation height.  Working in the soil — hard not to be happy! 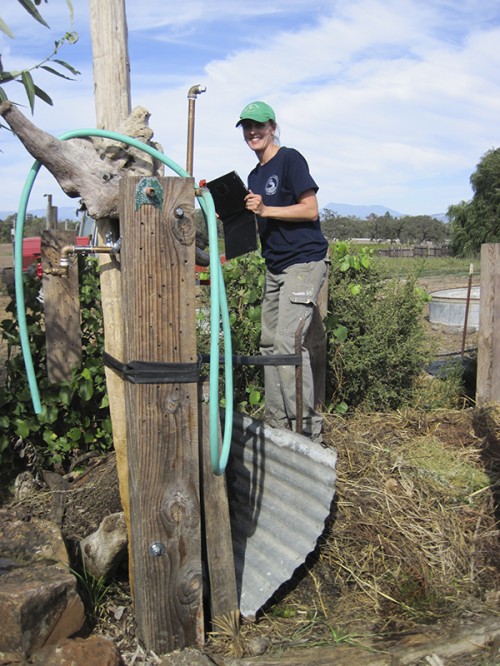 Photo op for teacher Sunny Galbraith on the compost pile.  Salamander French Drain is just left, downslope from the compost.  The full sheet of corrugated roof tin has been temporarily used to create a wall to collect topsoil from the installation site.  The tin sheet helps keep the topsoil and the compost separate.  After the major rock and adobe clay work has shaped the habitat, the loose topsoil pile will be spread back on top of the site.  Topsoil nutrients, minerals, and microbes return to their correct soil strata, the top layer. 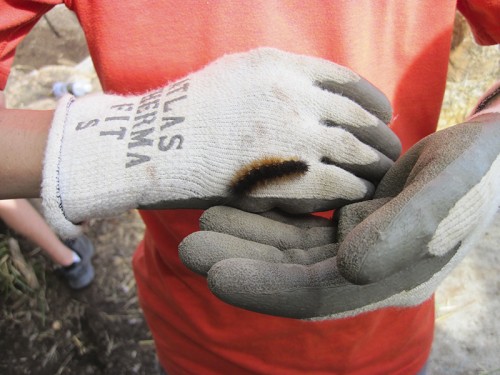 “Back you go”, this student returns a woolly caterpillar back to the nearby willow thicket. 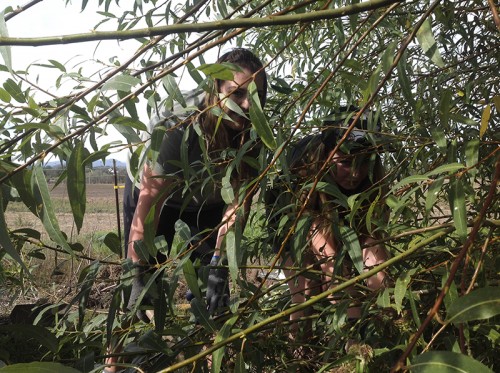 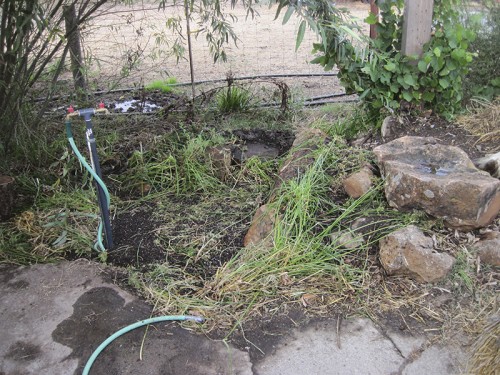 The students have finished, class is over, Salamander French Drain is in!  Note the natural look of this work site that was a deep hole, a trench with an exposed water pipe, and piles of soil just hours earlier.  Nutsedge plants and copious nutsedge seeds cover the soil and rock crevices.  Note the log retaining wall — it serves as a step-down from the higher compost bin.  Also note the pooled water, behind the fence; tomorrow there will be less water there.  The French drain (gravel bed under the soil in the front) will soak up some of each night’s irrigation and divert that water to the buried rock pile.  “New Condos Under Redwood Bench — 246 units, multi-bedroom, all units receive fresh water nightly.  Biodiversity guaranteed.  PRICED TO SELL! [Critter Real Estate Magazine, front page, October 9, 2015] 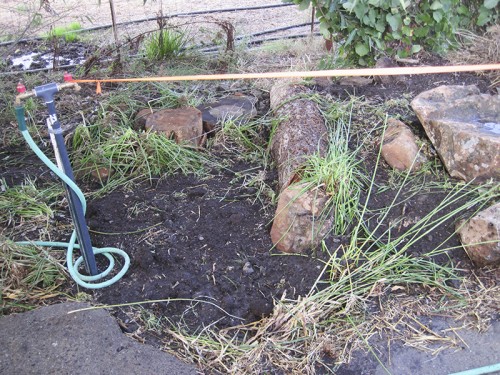 The students have blown through like a force of Nature — a wildlife habitat has been installed.  It is now that I discover the two buckets of topsoil that were set aside AND that were not used.  These two buckets were the first topsoil removed; fitting that they are the last returned.  I sprinkle the topsoil over the site.  The added nutrient-rich soil will increase the sedge bed’s chance of thriving.  Add water and this wildlife habitat is in! 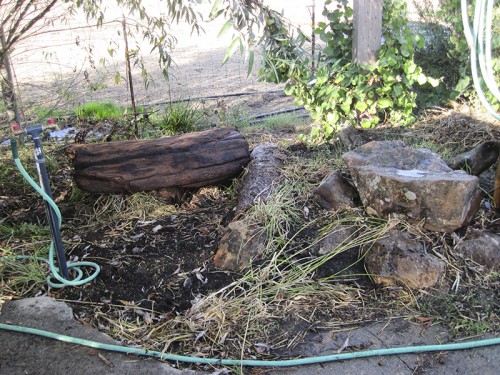 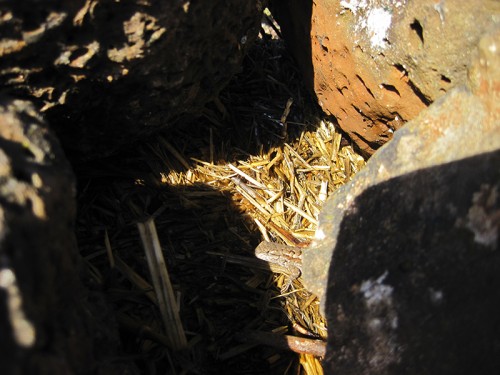 “Hey, don’t forget me!”  A western fence lizard peeks between fieldstone boulders that were not used in the habitat installation.  To store the rocks for later use, they were grouped together on the woodchip pile, thereby creating shelter for heat-loving critters like this lizard.