During each calendar month, Spore Lore will accept postings of residential wildlife habitats to Spore Lore’s facebook page, Habitat It and They Will Come.

Contest entries must include:

1) The name of the garden habitat.

2) The 4 components of wildlife habitat:

3) At least one picture of the the wildlife habitat.

To receive your contest entry “Spore Lore” sticker, and/or receive a book if your habitat is chosen as Habitat of the Month, please email your postal address to habitatofthemonth@sporelore.com; please include the name of your habitat in your email.

Please enter your garden habitat one time only.  However, if significant changes have been made to the habitat and/or significant documentation (like pictures!) of the habitat is available, then the same habitat may be re-submitted as a new contest entry.

Create wildlife habitat and have fun.

There is no cash value for any contest rewards or contest prizes.

Participants/Entrants of the Contest give Spore Lore permission to leave contest posts on Spore Lore’s facebook page, https://www.facebook.com/HabitatItAndTheyWillCome, and to post Contest entries and Contest winner announcements to Spore Lore’s facebook pages (Habitat It and They Will Come, Spore Lore, and Tony McGuigan), as well as Tony McGuigan’s/Spore Lore’s other social media sites (Twitter, Instagram, Pinterest, YouTube) and Spore Lore’s website (sporelore.com).   Spore Lore reserves the right to use the winner’s name (if provided in the contest entry), habitat name and habitat location (if provided in the contest entry),  for publicity purposes only in connection with the Contest and for no other reason.

Spore Lore is not bound to announce contest entries/winner/winners.

GOVERNING LAW: Contest governed by the laws of California and subject to all applicable federal, state and local laws and regulations. Accordingly, all issues and questions concerning the construction, validity, interpretation and enforceability of these Official Rules, or the rights and obligations of the Contestant and Sponsor in connection with the Contest, shall be governed by, and construed in accordance with, the laws of the State of California, without giving effect to any choice of law or conflict of law rules (whether of the State of California or any other jurisdiction). The Contest is void where prohibited by any applicable law. Contestants, by participating in this Contest, hereby waive and release, and agree to hold harmless Spore Lore and all of its respective officers, directors, employees and representatives and agents, from and against, any and all rights, claims and causes of action whatsoever that they may have, or which may arise, against any of them for any liability for any matter, cause or thing whatsoever, including but not limited to any injury, loss, damage, whether direct, compensatory, incidental or consequential, to person, including death, and /or property, arising in whole or in part, directly or indirectly, from their acceptance, possession, use or misuse of any prize, or their participation in this Contest, or any prize-related activity. By participating in this Contest, Contestants agree to be bound by these Official Rules and the decisions of Sponsor. Except where prohibited by law, by accepting a prize, winner agrees that Spore may use the winner’s name, address (state), photograph, likeness, and/or prize information for advertising, publicity and promotional purposes and to the use of statements made by or attributed to winner relating to Spore Lore or to this Contest and grants to Spore Lore any and all rights to said use without further notice and/or compensation except where prohibited by law.

You have landed on Day 4 in this 5-day series of videos depicting propagation of tree collard cuttings.  Enjoy!

Close-up of tree collard cuttings mulched with straw, comfrey leaves, and collard leaves. The collard cuttings are left behind to share the wealth with slugs and snails looking for food -- but please leave our new transplants alone for now. Note the cut back comfrey plant to the left; its leaves are used to mulch around the new collard starts. Cutting back the comfrey releases nitrogen to the soil via the die-back roots AND through the decomposing leaves themselves.

Mulch surrounding tree collard cuttings. Note the chop-and-drop'ed dock plant to the right -- all its leaves were used to mulch with or add to the compost for soil making. The leaves were yanked but the plant is expected to grow back, over, and over, again.

You have landed on Day 5 in this 5-day series of videos depicting propagation of tree collard cuttings.  Enjoy! 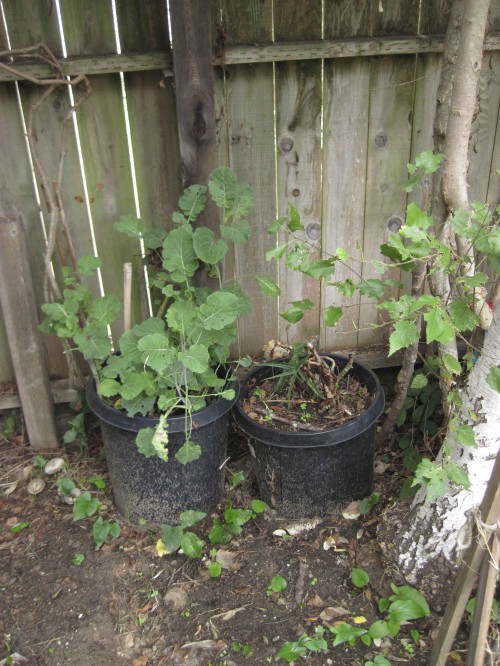 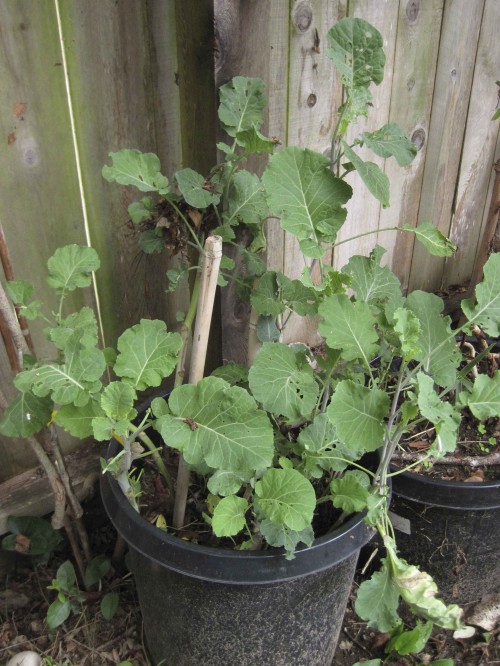 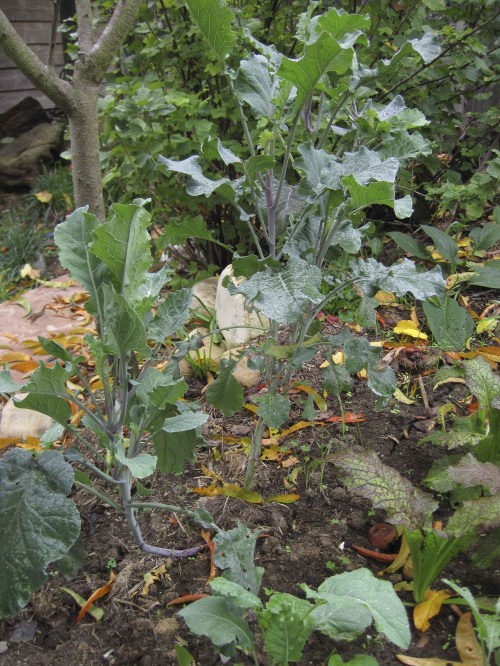 2 month old tree collard cutting growing on Dragon Spine Ridge. The specimen of focus here is the collard plant on the right. I pulled it up to inspect the root growth (to show YOU!), dug the roots back into the soil, and pruned off its top. Pruning off the top was advised (by me) because the inspection most likely destroyed some root mass. Less root mass, THEN less foliage will be supported. I also wanted to top off the young plant to encourage it to branch out lower rather than higher. See the next two pics. 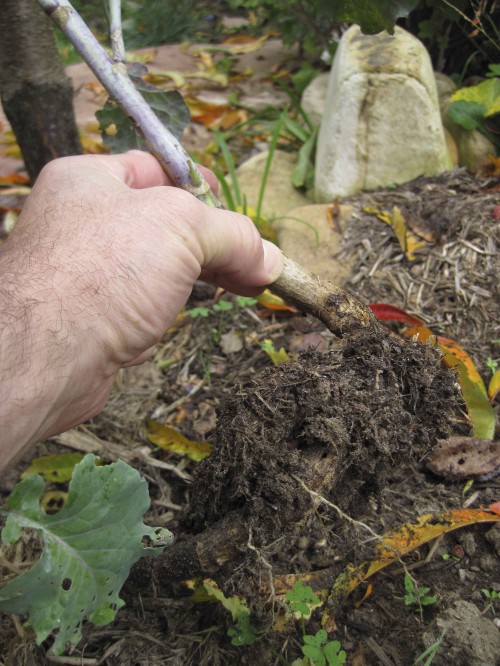 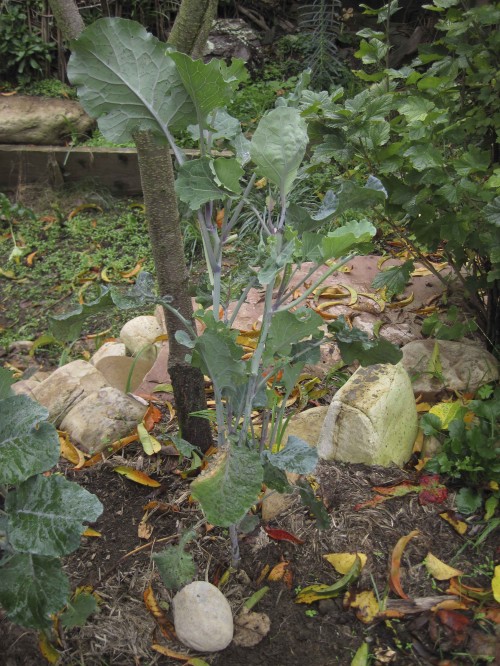 Young Tree Collard is back on its feet, a rock to help it hunker into the ground after my rude root inspection.

You have landed on Day 3 in this 5-day series of videos depicting propagation of tree collard cuttings.  Enjoy!

First a video  re “Collard Propagation”.   Today’s video is part 3 of 5 (1/day) for the series!   THEN some collard tree pics (below the video):

Transplanting tree collard cutting - 1 of 4. Note the bend in the cutting. Could be very difficult to stab this cutting into the ground and keep the leaves off the soil-mulch surface. But working with what we have, we'll lie the cutting on its side. The extra length of cutting (not pruning it back because of the bend) will allow more root development and better ensure propagation.

Transplanting tree collard cutting 2 of 4. Perfect fit for this tree collard cutting that has two 90-degree bends in it. Permaculture principle #1 = the problem is the solution. Because of its twists and turns, this cutting has primo real estate in the topsoil layer – look at how well the cutting, or new root system travels horizontally, along the rich microbe-abundant topsoil layer.

Note the chop-and-drop’ed dock plant in the above pic (lower right).  Sure it could have been ripped out while I was digging in the transplant.  BUT, I would rather have the dock plant’s large, voluptuous leaves soak in the sun’s rays, create carbon (sugars) and other organic matter in the form of more leaves and a more developed root system.  THEN, I will come along again (for the umpteenth time!) and demand that the plant start all over.  Besides perhaps emotionally scarring Dock, the leaves I’ve collected can be used to make mulch, compost, or salad.  The root system that was supporting all that leaf growth dies back; the leaves are no longer feeding it.  Those died-back roots then become food for the soil as well as organic material that retains moisture for the new roots to come as the dock plant regrows.

Chop and drop video by TrevorsGarden.

You have landed on Day 2 in this 5-day series of videos depicting propagation of tree collard cuttings.  Enjoy!

First a video  re “Collard Propagation”.   Today’s video is part 2 of 5 (1/day) for the series!   THEN some collard tree pics (below the video):

Collard Tree prunings, ready to trim the leaves from the stems for a meal. The remaining stems will be used as propagation cuttings.

Preparing Collards for the kitchen and for propagation. When given the chance, work outdoors. Good vitamin J (joy)!

Preparing Collards for the kitchen and for propagation. The edible leaves have been stripped off of the harder/woodier stems. For illustrative purposes, I arranged the stems on the table to show you how far each stem is pushed into the soil. The line between pruners and sheath represents ground level. Note how little leaf bulk is left on the stalk; root development is the priority.

Soaking tree collard cuttings for tomorrow's transplant. We recently had a good rain. Plenty of nutrition in that funky water. The bucket was left outdoors to collect water; leaves were a bonus.

You have landed on Day 1 in this 5-day series of videos depicting propagation of tree collard cuttings.  Enjoy!

First a video  re “Collard Propagation”.   Today’s video is part 1 of 5 (1/day) for the series!   THEN some collard tree pics (below the video):

Tree Collard (supported by bamboo poles). Harvesting the collard greens is as easy as pruning the stems and leaves off the main trunk. Leaves are cooked down/steamed like kale. Stem sections can be added to stir-fry. Thicker pruned stems are best propagated -- stuck into soil and left be; a little water helps get the roots going. Soon those cuttings will become their own tree.

20121107 Tree Collard trunk split during propping up trunk. The "tree" is best kept from growing too tall because the wood is weak -- more of a woody vegetable than a tree wood. The split was left to fare on its own -- an experiment on my part to see if the fast-growing plant will repair the wound quickly. My perfect kind of science experiment -- do nothing!