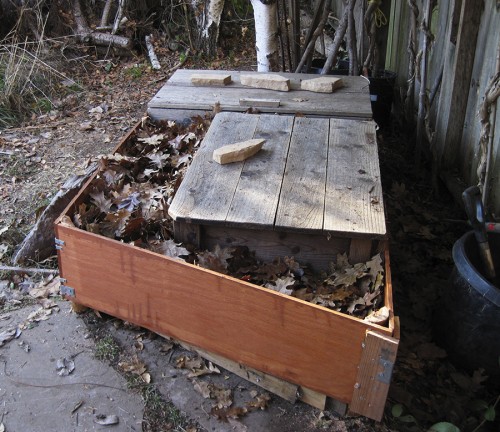 As I discuss in my monthly Native Plants and Wildlife Gardens blog article, “Over-Wintering Insects in Insulating Leaf Pile“, I wanted to insulate our earthworm boxes to take a little of this winter’s chill off the critters inside the boxes.  Surrounding the boxes with leaves accomplish 2 goals: 1) insulating the boxes to keep them warmer, and 2) provide more over-winter leaves to provide more wildlife habitat in our garden.   Here are 4 videos of the project.  Enjoy!

Tony McGuigan discusses his plan to keep outdoor earthworm boxes warmer by surrounding them with leaves and straw.  The organic fluff, (leaves and straw) will create an insulation barrier on the outside of the earthworm boxes.  Over-wintering insects will thrive in organic pile and move to the boxes, becoming food for the chickens when they are treated to the opened boxes.  Come warmer weather, the frame to hold the leaves/straw in place will be removed. ***Toast and Marmalade, Tony and Anita’s two Bard Rock hens, visit the earthworm boxes BEFORE construction.***

An in-process video of the construction project.  The frame is up; leaves are yet to be filled into the insulating spaces.

A pile of leaves is worked into the insulating spaces alongside the earthworm boxes. 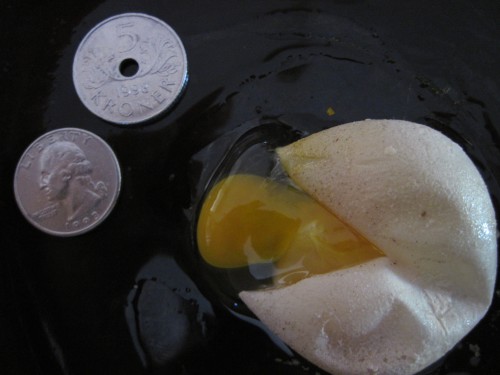 Cozy Cottage Egg Farm's 1st egg, layed by our Bard Rock hen, Marmalade. The coins are used for relative size: a Norwegian 5 kroner coin and a U.S. quarter (25 cents) coin. The eggshell was very thin and split open in the coop. Still yummy out of the fry pan!

During each calendar month, Spore Lore will accept postings of residential wildlife habitats to Spore Lore’s facebook page, Habitat It and They Will Come.

Contest entries must include:

1) The name of the garden habitat.

2) The 4 components of wildlife habitat:

3) At least one picture of the the wildlife habitat.

To receive your contest entry “Spore Lore” sticker, and/or receive a book if your habitat is chosen as Habitat of the Month, please email your postal address to habitatofthemonth@sporelore.com; please include the name of your habitat in your email.

Please enter your garden habitat one time only.  However, if significant changes have been made to the habitat and/or significant documentation (like pictures!) of the habitat is available, then the same habitat may be re-submitted as a new contest entry.

Create wildlife habitat and have fun.

There is no cash value for any contest rewards or contest prizes.

Participants/Entrants of the Contest give Spore Lore permission to leave contest posts on Spore Lore’s facebook page, https://www.facebook.com/HabitatItAndTheyWillCome, and to post Contest entries and Contest winner announcements to Spore Lore’s facebook pages (Habitat It and They Will Come, Spore Lore, and Tony McGuigan), as well as Tony McGuigan’s/Spore Lore’s other social media sites (Twitter, Instagram, Pinterest, YouTube) and Spore Lore’s website (sporelore.com).   Spore Lore reserves the right to use the winner’s name (if provided in the contest entry), habitat name and habitat location (if provided in the contest entry),  for publicity purposes only in connection with the Contest and for no other reason.

Spore Lore is not bound to announce contest entries/winner/winners.

GOVERNING LAW: Contest governed by the laws of California and subject to all applicable federal, state and local laws and regulations. Accordingly, all issues and questions concerning the construction, validity, interpretation and enforceability of these Official Rules, or the rights and obligations of the Contestant and Sponsor in connection with the Contest, shall be governed by, and construed in accordance with, the laws of the State of California, without giving effect to any choice of law or conflict of law rules (whether of the State of California or any other jurisdiction). The Contest is void where prohibited by any applicable law. Contestants, by participating in this Contest, hereby waive and release, and agree to hold harmless Spore Lore and all of its respective officers, directors, employees and representatives and agents, from and against, any and all rights, claims and causes of action whatsoever that they may have, or which may arise, against any of them for any liability for any matter, cause or thing whatsoever, including but not limited to any injury, loss, damage, whether direct, compensatory, incidental or consequential, to person, including death, and /or property, arising in whole or in part, directly or indirectly, from their acceptance, possession, use or misuse of any prize, or their participation in this Contest, or any prize-related activity. By participating in this Contest, Contestants agree to be bound by these Official Rules and the decisions of Sponsor. Except where prohibited by law, by accepting a prize, winner agrees that Spore may use the winner’s name, address (state), photograph, likeness, and/or prize information for advertising, publicity and promotional purposes and to the use of statements made by or attributed to winner relating to Spore Lore or to this Contest and grants to Spore Lore any and all rights to said use without further notice and/or compensation except where prohibited by law.

It’s now Friday, so my back and body in general are nearly recovered.  On Monday this week, I spent the whole day shovelling manure and compost on top of Food Ridge West, our raised veggie bed and animal habitat.  Veggie bed — because the debris pile covered with manure/compost/gardening soil will be plantable this late spring.  Below are three videos of this week’s progress with the hugelkultur Food Ridge West.  Enjoy!

Food Ridge West Hugelkulture now has a layer of pine tree limbs in the center of the better, more growth-supportive wood debris pile.  Horse manure will be used to “burn” the pine and help it become a good veggie bed resource faster.

Eleven yards of manure/compost are now on the hugelkultur.  The compost corral is empty, almost — the rest will go to another site.  Now, we are ready to give the hugelkultur a new hairdo. 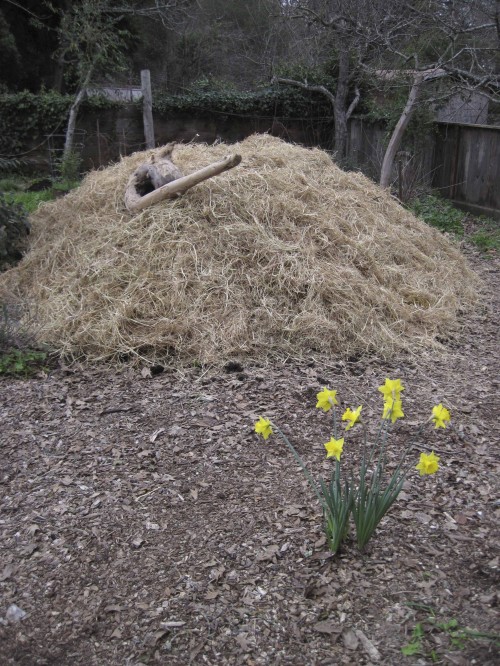 Food Ridge West before final layer of garden mix.  The shredded rice straw bale is used to reduce the soil’s erosion from the coming rains.  The final layer, of organic garden mix, will be added in a couple of weeks and by then the compost/manure under-layer will have settled some.

Happy habitat creations and don’t forget to sniff the daffy’s.

Yesterday, Valentine’s Day ♥, was the start of  new layers to our animal habitat/veggie bed hugelkultur, Food Ridge West.  The new layers are pine tree prunings, horse manure, and organic vineyard compost and can be seen in my post  Happy Valentines Day AND Garden What You Love.

Final touches to the pine limb layer are shown in this video:

A straw bale holding bin was constructed on our driveway to stockpile soil-making material till moving them to the hugelkultur.  Also, the rectangle box, or “corral”, would be a good place for the compost company to dump the ordered organic vineyard compost. 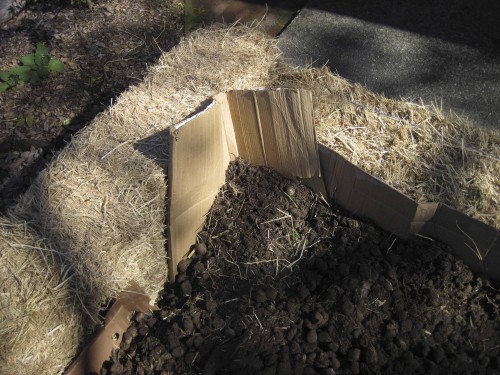 Soil corral reinforced with cardboard corner.  The cardboard gives structure to the straw housing and prevents leakage between the bales.  The rough concrete driveway is lined with a cardboard floor and folded up the sides of the bales.  Easier cleanup of the concrete and less leakage of the corral’s contents.  The manure and compost impregnated cardboard will be composted, perhaps thrown in the bottom of another hugelkultur after we clean up this project.

A couple of pickup truck bed loads of manure were used to line the bottom of the corral so that the vineyard compost could be dumped on top.  Shoveling out the pile into wheelbarrow loads then mixed the two soil additives to be dumped onto the hugelkultur. 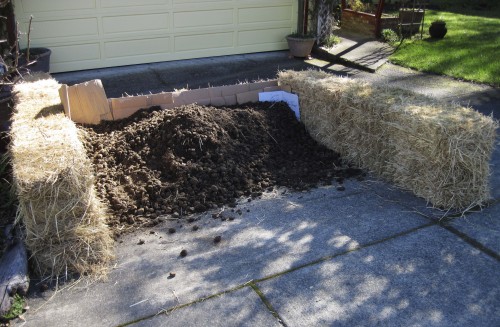 Early stage of manure and compost bin.  The bin was expanded with more bales, and a second tier of bales was added, to fit the incoming vineyard compost mix.

And here comes the dump truck!

Have a happy hugelkultur habitat day!

Today’s video shows the final stages of building the base of the hugelkultur.  Its “keyhole garden” shape is discussed.

Heavy limbs weighing down the lighter sticks on Food Ridge West.  This woody mesh of twigs, sticks, and limbs makes a good base for organic debris layers to come.  Note all the nooks and crannies that will be available to garden critters.  HABITAT!!!

Adding lighter twigs, then heavier sticks and limbs to the hugelkultur.  The heavier limbs will help compress the organic debris pile.

Today is my second posting of rebuilding hugelkultur Food Ridge West — all animal habitats get a name!

Today’s video starts with pulling apart an old firewood pile and some critters found in that habitat.  One critter is relocated to the hugelkultur Food Ridge West.

A centipede on Tony’s patio; pic taken during another project day.  Note the long tail antennae (bottom), how each body segment has one pair of legs (millipedes have 2 pairs of legs per body segment), and how shiny red the body is (a defensive “I look like venom” strategy).

Hugelkultur is the piling up of organic matter, like wood stumps and prunings, to make a raised mound on which crops are grown.

Go to Hugelkultur to see more description of this European garden art.

Today’s video introduces Tony’s project — a hugelkultur on top of a previous hugelkultur.  The original pile of prunings and soil has decomposed and settled and is now ready for another round of rounds (pun intended!).

The yard debris pile that we have converted to a hugelkultur (by adding soil on top) stands nearly waste high to Anita.

Last year’s hugelkultur topped off with straw before final soil layer.  The hugelkultur was a good place to get rid of, “use”, some on-hand adobe soil.  Ultimately, the layers of organic matter below and above the adobe soil will enrich that soil.

Last year’s hugelkultur, Food Ridge West, produced a garlic crop.  Notice how much the soil-covered debris pile has settled – the vertical log that was buried is now poking through the central walk path.

The BEFORE to this year’s Food Ridge West hugelkultur project.  The soil level has settled even more. The hugelkultur’s inner debris pile has broken down further – note the vertical log sticks out yet further than from last spring’s garlic crop pic, above.  Piles of black oak branches and limbs are ready to add to the hugelkultur.